With gratitude and thanks to God for His mercy and love, the brothers in the region Timor Leste  held a Mass of thanksgiving for the founding of the Congregation on 25 August, and also the reception of three postulants: Jose Soares da Silva, Deonisio Abrantes da Costa Gomes, and Jacob Soares Pereira.

Prior to their reception, the three aspirants participated in a tridium in the community of Becora Dili, the regional house. They were accompanied by Br. Leonardo do Carmo Pinto CMM as the tridium leader.

The postulant reception mass and thanksgiving for the founding anniversary of the congregation was presided over by Pastor Norberto, CMF. In his reflection the priest invited the postulants and all those present in Mass to build a life full of love. He explained three ways of loving: “Love to achieve a goal, conditional love, and unconditional love.” His words were inspiring and invited the postulants to love God’s call without conditions, and to give themselves totally and radically to God’s will.

The Mass was enlivened by a choir of novices and brothers of the postulate community of Akanunu-Hera, together with Br. Sisco and Br. Andre Neno Abi. The regional superior Br. Silvino Freitas Belo appeared in front of the altar to accept the three brothers as postulants of the CMM Brothers in the Timor Leste region.

Congratulations for the postulants, may they start the postulant period with enthusiasm and remaining faithful to live it with a sincere and happy heart. 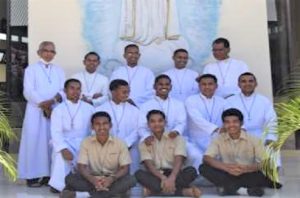 Annual Retreat of the Brothers in Timor Leste