"Duc in Altum: “Put out into the deep water"

The Eucharistic celebration was led by Father Damianus Yangko Alo, Parish Priest of St. Ignatius Church of Manado, in the chapel of the Community of St. Margareta Maria de Alocoque. The theme of the celebration was “Duc in Altum” or “Put out into the deep water” (Luke 5:4).

Besides accepting the cloak, the novices also received the Constitutions and the congregational cross. The cloak, Constitutions and cross express the characteristics of the Congregation of Brothers CMM that will be practiced by the novices in their period of special formation. They are ready to learn to live, be directed and guided according to the rules or way of life, the charisma and spirituality of the Congregation of the Brothers CMM.

In his sermon Father Damianus Yangko Alo revealed that the cloak shows the identity, characteristics and status of the one who wears it.  He emphasized that the novices should always wear their cloaks to show their identity as CMM Brothers. As such they are known by people as Brothers CMM. Father Damianus Yangko Alo also offered prayers and gave special blessings to the new novices.

Because of Covid-19 regulations the Eucharist was celebrated in close circle with only a few attendants, including some brothers from Manado and Tomohon. At the end, Br. Marselinus M. Nara Atu delivered some words of thanks representing the novices and he expressed his gratitude to Father Daminus Yangko Alo, who had led the Holy Eucharistic Celebration for them.  The novices also gave thanks to Br. Frans Kilat and Br. Alselmus Abi who had guided, accompanied, taught and assisted them during their postulancy. Likewise for the brothers, the lay teachers, and the employees in the postulate who also taught and helped them to know the congregation. In his concluding speech Br. Alfons Seran, representing the provincial board of Indonesia, emphasized that the novices should live as a blessing for others, especially for the fellow brothers in the novitiate.

After the Eucharist there was a small scale thanksgiving celebration at the Postulate. The priest and all the brothers were very happy and rejoicing over the five novices who had just entered the first year novitiate. 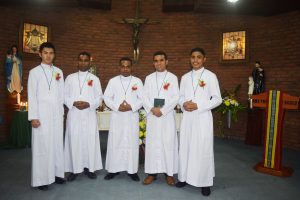 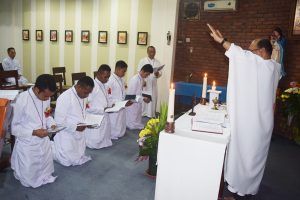