St. Vincent de Paul also known as ‘The Apostle of charity’ is a saint of the ancient days. The patron saint of the works of charity was given to the Brothers CMM by our founder Bishop Johannes Zwijsen as an example of service to the poor in our society. Three of our institutions in Kenya/ Tanzania province have taken St. Vincent as their patron saint.

In our school, St. Vincent De Paul Boys’ Primary School in Mosocho, we commemorate his Feast every year on 27th September but this year was exceptional since we commemorated it on 25th of September 2021 – being the closest weekend to the feast. As St. Vincent fraternity we dedicate this day as a Family Day. This year we used the opportunity to pause and reflect on how dear he was to the poor following his merciful attitude towards them. Pope Francis states that charity is central to the church’s mission, and we are called to share it with the world, especially those in need just as St. Vincent De Paul did.

Making Jesus known to the poor

Burning with the desire to make Jesus known to the poor, Vincent devoted himself passionately to preaching, especially through popular missions and by careful attention to the training of priests. He quite naturally employed a “little method”, speaking first by his life and with great simplicity, in a familiar and straightforward way. The Spirit used him as the means for a great outpouring of generosity in the Church. Inspired by the early Christians who were “of one heart and soul” (Acts 4:32), Saint Vincent founded the Confraternities of Charity, who cared for those in greatest need by living in communion and joyfully sharing their possessions, in the conviction that Jesus and the poor are the treasure of great price. As he loved to repeat, “When you visit the poor, you encounter Jesus.”

As a school we also dedicate ourselves in helping the poor in our surrounding. We donate learning materials to our neighbouring schools and participate in the education of needy children from the surrounding. The first one is through with his secondary education and is heading to university this year. The second is in form 4 while two are in form 1. Currently we have two in class 6 who are being supported by the school. This is geared in actualizing the ‘shirikisho’ spirit of St. Vincent de Paul.

Eucharistic celebration is always our first priority for the day during which we receive new members in the holy Catholic Church. This year, 12 boys were admitted to the sacrament of baptism, whereas 24 others received the first Holy Communion. The event was presided over by Fr. Stephen Orioki , the father in-charge of Nyabururu parish and graced by parents who were accompanied by Godparents to witness the occasion. Teachers and pupils were equally present to give moral support to the new members as they underwent this initiation to Christian hood.

After mass, parents and Godparents were given a special chance to encourage their children to follow the good teachings of St. Vincent de Paul, such as the virtues of obedience, humility and others.

Fr. Stephen in his homily implored the catechumens to stay steadfast in their faith and not to waiver and lose focus. He also urged parents and Godparents to journey with them in their faith especially as they grow up. They were also taught the importance of sharing and being merciful towards each other both in school and at home. As Christians, we should allow the spirit of God to guide us through this journey of faith.

The head teacher Br. Elijah Agilo on his part congratulated the catechumens for their perseverance and successfully undertaking catechesis. Thanks to Br. Duncan Wafula who took charge to ensure those boys took a step in their Christian life. St. Vincent de Paul was indeed a God given gift to us as the brothers CMM as his virtues have always guided our apostolate wherever we work.

What touches me most in our institution is the commitment and dedication shown by the brothers, which has also influenced our staff members. This has attracted many parents to bring their children to study in our school. Apparently even non-Catholic pupils attend catechesis and at times request to be baptized in the Catholic Church even though this can only materialize with the consent of a parent(s) of which some parents do allow. May God bless the work of our hands. 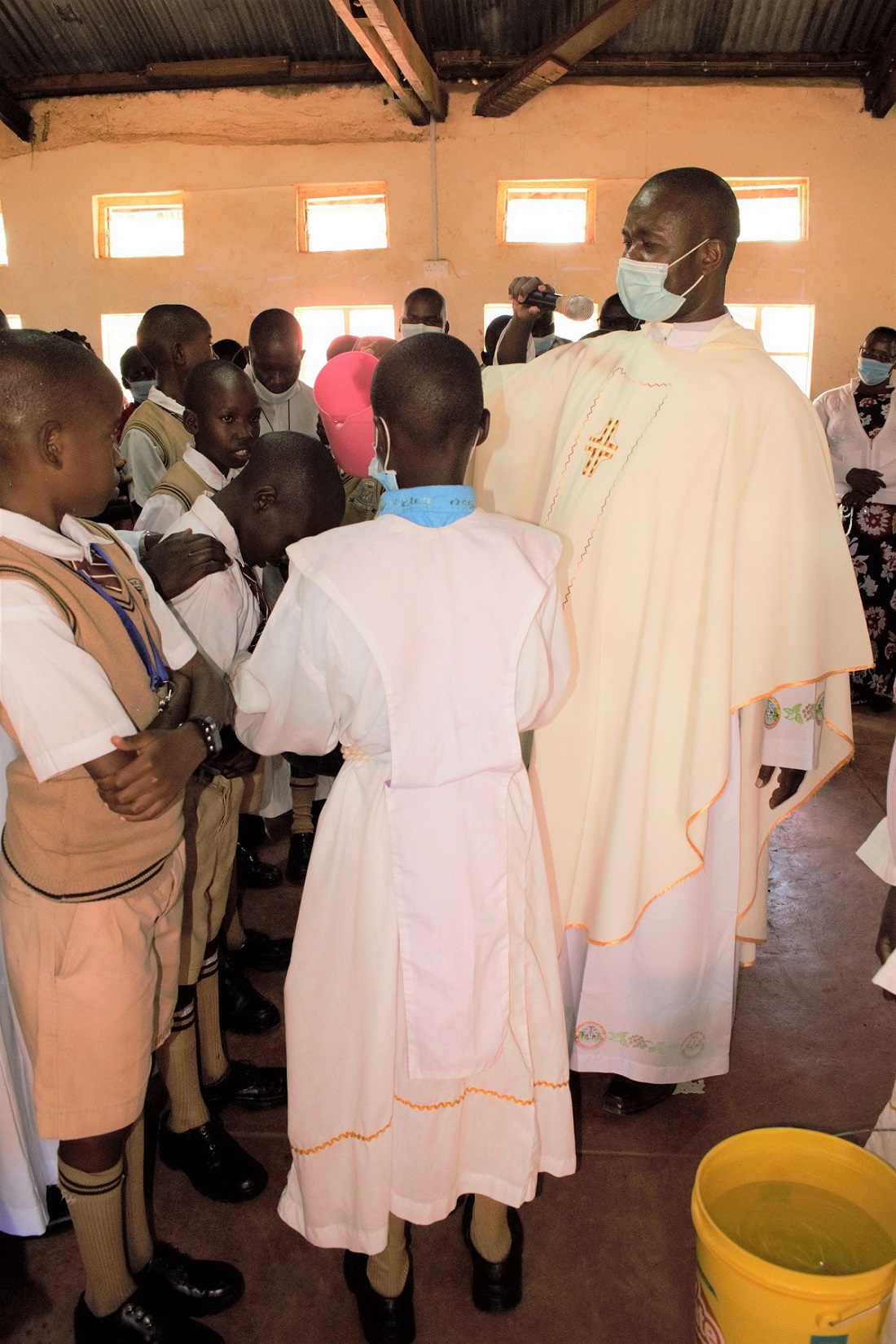 Fr. Stephen Orioki is baptising one of the catechumens