On 5 September 2021, after a pontifical eucharist in Aarle-Rixtel (The Netherlands), celebrated by emeritus Bishop Antoon Hurkmans, and in the presence of the Brothers Nicácio Huiskamp and Adriano van den Berg, a statue of Father Eustachius van Lieshout (1890-1943) was unveiled and blessed. He is better known as Padre Eustáquio of the Congregation of the Sacred Hearts. From 1925 until his death, he worked as a missionary in Brazil, with Damiaan de Veuster (1840-1889) the apostle of the lepers of the island of Molokai, as his example. He set himself the goal of being a missionary amid the sick and those in pain and sorrow and for all who were seeking health and peace. On 15 June 2006 he was beatified. That feast was celebrated by a large crowd in a football stadium in Belo Horizonte. Bishop Hurkmans and the Brothers Nicácio and Adriano were among them.

The nephews of Padre Eustáquio, Jan and Will van den Boomen, together with the association ‘Friends of Eustachius’ had taken the initiative to place this bronze statue at the church square in Aarle-Rixtel, his place of birth. The statue was designed and made by artist Edu Santos living in Piracicaba, Brazil. In 2009 he also made a bronze statue for the Padre Eustáquio Church in Belo Horizonte.

The Brothers Nicácio and Adriano who have been associated for a long time with Colégio Padre Eustáquio as well as with Padre Eustáquio parish, promoted the veneration of Padre Eustáquio in Belo Horizonte and were therefore quite happy to witness the blessing of this statue by Bishop Hurkmans in Aarle-Rixtel. 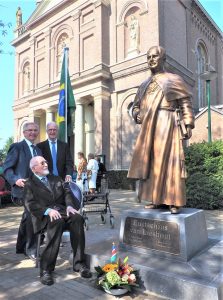 A humble donation with a big result